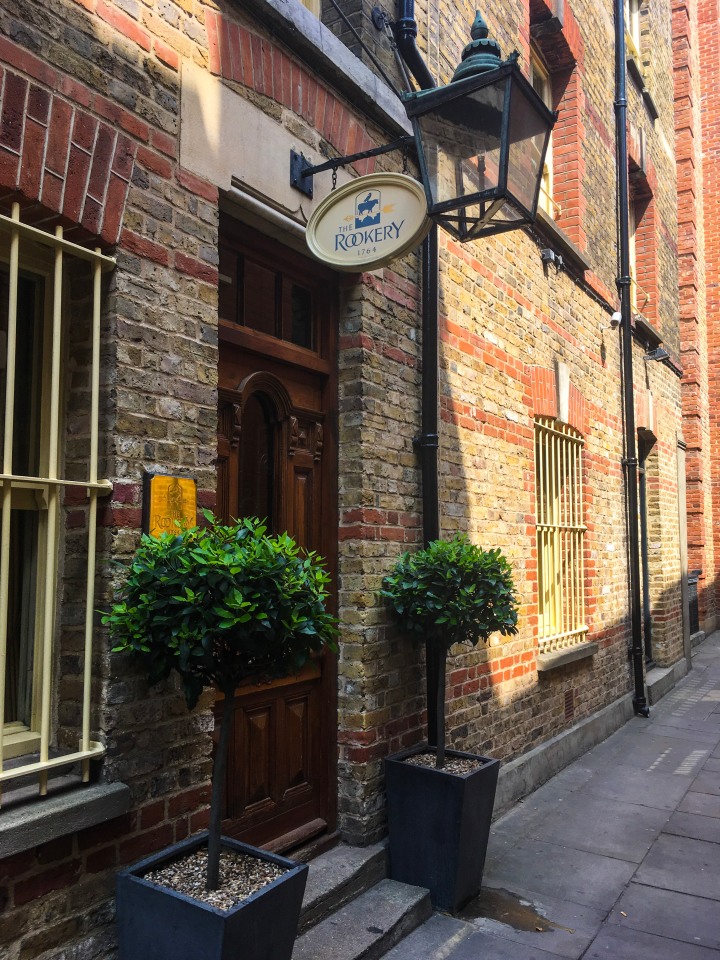 It was a quiet Sunday in Clerkenwell when we made our way down to The Rookery hotel from Farringdon station. The heat was oppressive and we were still hot and bothered from the tube but we were there soon enough as it was only a short walk. We found a non-descript doorway framed by an old Victorian gaslight and after ringing the doorbell, we entered to begin our stay in this little slice of old London.

We entered the reception area, an old drawing room furnished with a fireplace and an antique cushioned bench and we immediately felt like we were transported to a different era. We were taken to our room via a quick-tour of the hotel and after settling in we wanted to start exploring.

Our room was called the ‘Henry Carey’ room. All the rooms are named after various historical figures that were prevalent from the area and the Georgian era. Henry Carey was a composer who was the illegitimate son of the 1st Marquis of Halifax. He composed numerous songs but fell into despair and died penniless, committing suicide in the middle of the 18th century.

Short history lesson over, we made our way down into the reception room. On our way there I felt like a school kid who had been left in a museum after closing. The hotel has a multitude of winding staircases and crooked hallways for you to explore. If it wasn’t for the fact that it was a hotel with guests, (I didn’t want to be caught creeping outside of people’s rooms), I would have happily spent some time just wondering the hallways and finding all the secrets that this old house would hold. Maybe see if I could have stumbled across the ghost of Henry Carey.

The drawing room had two armchairs and a sofa surrounding the fireplace with tasteful rugs, antique furniture and paintings throughout. We explored the bar area and I spent some time in the small garden. It was a Sunday so it was a lot less hectic than usual but for the location it was very peaceful.

Afterwards, we sat reading on the sofa and we were as comfortable as if we were reading at home. We lamented the fact it wasn’t cold so we could have sat next to a roaring fire and read with a coffee or a hot chocolate so I made a mental note to make a booking in the winter.

Our room had a four poster bed with the smoothest cotton sheets I’ve ever experienced. I don’t know what the thread count was but it was extremely high. Not wanting to leave the bed but needing to shower for dinner, I went into the bathroom for the first time.

The hotel made a point of mentioning that in Georgian times, indoor bathrooms were not the norm so they had no frame of reference for furnishing but that they tried to furnish them in a way that would have been pleasing to a Georgian nobleman. I think they did a good job. Equipped with a roll-top bath and a chessboard tiled floor, it was spacious and bright and I was excited by the thought of relaxing in the tub. I nearly called for Jeeves to draw me a bath!

After dinner elsewhere, we made our way back to the drawing room for a nightcap. The hotel operates an honesty bar policy, whereby you help yourself and you put down what you had and your room name.We sat down with our drinks and we discovered that the hotel had a house cat.

The cat was named Bagheera after the panther in ‘The Jungle Book’ and it was an appropriate name. The cat was jet black and huge. Wondering at first if it was a baby panther we soon discovered he was very friendly. He spent some time with us, rolling around on the floor and showing off and after a short fuss he wandered off.

We turned in for the night and ordered breakfast for the following morning by filling in a card and hanging it on the door handle. Breakfast arrived on time and the food was very good but I do think it was a little over-priced for what it was. The bacon sandwich was around £12. It was very good admittedly and the pastries were still warm. It was nice to lounge in bed with breakfast though and definitely worth the indulgence.

The hotel describes itself as “… all period charm. Polished wood panelling, stone flagged floors, open fires and genuine antique furniture give the place a warm, homely atmosphere – more private club than hotel” and this is entirely accurate. From the heritage colours of our bedroom, rich and warm to the heavy, brocade curtains, the hotel exudes warmth.

As we prepared to leave the room I was a little sad that we had only spent the night here. This is the sort of hotel that I would happily spend an extended period of time in: I get the feeling that there is a lot more to discover here. The service was exceptional but not disingenuous like you get in a lot of top-end hotels, everything was smooth and courteous, and nothing felt like a problem.

There is a wealth of things to do in the immediate area with the Church of St. Bartholomew the Great, St. Pauls Cathedral, the Museum of London and the Barbican centre all within a 10-minute walk and this makes a fantastic base from which to explore.

The hotel was beautiful and elegantly furnished; you truly experience the grandeur of the Georgian era. It was nice after having dinner in The Shard, an ultra-modern edifice, to come back to The Rookery and feel that you were stepping back in time.

You genuinely forget that you are in 21st century London whilst you’re staying there. At least I did, which was part of the fun and the charm of staying there. The biggest compliment I can offer The Rookery is that, whilst we were there, we felt like we were at home. I can’t wait to return.

Room on a Sunday evening- £160. Although it is, naturally, more expensive on Friday and Saturday evenings. All the rooms have modern amenities; air conditioning, Wi-Fi and flat-screen televisions.

7 thoughts on “Stepping back in time: A Dispatch from The Rookery.”

Leave a Reply to Dispatches from... Cancel reply

I was lucky enough to be selected to make a photobook using Saal digital’s software. I received a €100 voucher to trial their professional line of photobooks in exchange for an honest review. I’d like to thank @saaldigital_uk for selecting me. It was fun looking through and selecting my best photos and it was the first time I’ve printed my photos into a book.⁣ ⁣ I downloaded their own software to design the book and there is a decent amount of photobook styles to choose from. It’s fairly simple to use but I did need to look at a few tutorials on their website so that I knew how to change a few things. You can use your own custom fonts which need to be activated through the settings. I had to manually change the font and sizes on all the text I’d already inputted. It was quite frustrating and I feel that should have been clearer. Also, I wanted to change the cover from a faux-leather to an acrylic one. Again, I needed to look at a tutorial as it wasn’t very clear that this was possible. One more thing I would have liked was to title the spine. This wasn’t possible with the acrylic cover.⁣ ⁣ I liked the range of picture layout options for the pages, it was easy to add extra pages and there is a quick layout function where you select your photos and the software automatically arranges them. I chose to manually layout the pictures though as I wanted more control over the design, and I wanted to add titles and captions. It’s quite a time-consuming process taking around 8-hours in total but it was enjoyable. If nothing else, it eased some lockdown tedium. The total for the photobook including delivery was around €106... Continued in comments.
Sometimes, I like to try and capture photos in reflections. People can be guarded when you point a camera at them but more relaxed when they feel unobserved. I would never have got this shot had I been aiming at the subject. ⁣ ⁣ #london
I like to think she was telling him off for staying out with his friends for too long. ⁣ ⁣ #cefalu #urbanstreetphotogallery #spicollective #curiouscameraclub #myspc #thestreetphotographyhub #streetfinder #bnw_greatshots #bnw_magic #sicily #streetphotography #lensculture #lensculturestreets #culturetrip #streetcapture #streetcaptures #blackandwhite #blackandwhitephotography #bnw #bnwphotography #bnw_captures #lensculturestreet #culturetrip #bnwstreetphotography #sicily🇮🇹 #cefalù #piazzaduomo #streetsstorytelling #blancetnoir #biancoenero
Lady on the Stairs- Bucharest, May 2019. ⁣ ⁣ #bucharest
Anti-fur demonstration outside Woolrich in Central London. The executioner skins the “animal” alive. A really visceral way to get your message across. ⁣ ⁣ #london
Magnificent light at the Church of the Holy Sepulchre, Jerusalem. ⁣ ⁣ #jerusalem